A New Pier For Everyone St. Petersburg is the birthplace of commercial aviation, so it’s appropriate that we commemorate that history in a suitable way. The Benoist Plaza (it’s pronounced “Ben-wah,” by the way) features a life-sized sculpture of the Benoist Airboat that pilot Tony Jannus flew roundtrip to Tampa on January 1, 1914. His only passenger that day? St. Pete Mayor Abe Pheil, who paid a then-astronomical sum of $400. Fun historical fact: The exhibit is located on the exact same spot as the hangar used for that day’s flight. This must-experience facility is operated by Tampa Bay Watch, a highly respected environmental organization dedicated to the protection and restoration of the Tampa Bay estuary. Located on the over-water walkway approaching the Pier Point, the Discovery Center presents all you need to know about Tampa Bay’s unique ecosystem in a way that’s entertaining and hands-on.

From the outset, the city of St. Petersburg was committed to making the Pier both fun and educational. That’s why we’re proud to welcome the Tampa Bay Watch Discovery Center to the new St. Pete Pier. Established in 1993, Tampa Bay Watch is dedicated to the protection and restoration of the Tampa Bay estuary through scientific and educational programs. The new space at The Pier is a must-see for people of all ages, offering interactive exhibits, video presentations, a touch tank, and docent-led tours. The center also houses a classroom space and an open-air wet classroom perfect for school field trips and summer camps. The wet classroom is bordered by walkways with railings and includes a covered observation deck. Echelman’s art embraces change. The monumental sculpture gently billows above the Pier District, allowing the wind to create a choreography of constantly changing shape in the sculpture’s soft surface. The sculpture’s color also transforms at every moment while its surface interplays with natural and projected light. In the daytime, the sculpture casts shadow drawings on the park and people below, and at night it transforms into a glowing beacon of magenta and violet light.

The internationally-renowned artist, born and raised along the shores of Tampa Bay, was inspired by historical postcards depicting blue and white striped beach parasols together with the geometric forms made by colonies of barnacles growing on the underside of the pier itself. The sculpture’s design in aerial view can be read as three barnacle-like parasols nestled together.

As she continued her design process, she learned of the site’s important Civil Rights Movement significance, as the place where local citizens began peacefully challenging racial barriers, leading to the 1957 US Supreme Court case ruling which upheld the rights of all citizens to enjoy use of the municipal beach and swimming pool without discrimination. The sculpture’s geometry in the section is composed of multiple arcs, which gently billow in the wind. The artist titled the sculpture Bending Arc in reference to MLK’s words: “The arc of the moral universe is long, but it bends toward justice.”

A public-private partnership, the fiber sculpture was funded entirely by private donors, and the cost of its related infrastructure and park was covered within the city’s $92 million Pier District project. Made entirely of lightweight fiber, the monumental sculpture is engineered to withstand 150 mph winds, and the maximum force applied to its masts is 65 tons. The rope is made of fiber 15 times stronger than steel by weight and was used by NASA to tether the Mars Rover. The net in the plan covers 47,500 square feet. The net and ropes weigh a total of 5,330 pounds.

Echelman’s artwork offers visitors an oasis where they can seek a moment of calm sensory experience and heightened awareness of nature and our place within it. “The sky is the canvas for my artwork,” says Echelman.

Echelman sculpts at the scale of buildings. Her art defies categorization as it intersects Sculpture, Architecture, Urban Design, Material Science, Structural & Aeronautical Engineering, and Computer Science. It transforms with wind and light, and shifts from being “an object you look at, into an experience you can get lost in”. Curiosity defines Echelman’s nonlinear educational path. After attending public school in Florida, she studied history and documentary film at Harvard, then moved to a Balinese village for 5 years, before returning to the US to complete separate graduate degrees in psychology and in painting. Then a Fulbright brought her to India to teach and present painting exhibitions, so she shipped her paints to begin — but they never arrived. Finding herself in an Indian fishing village, she turned to local fishermen to be her teachers and discovered netting as a material to make lightweight sculptures that move with the wind.

Recipient of the Guggenheim Fellowship, Echelman was named an Architectural Digest Innovator for “changing the very essence of urban spaces.” Her TED talk “Taking Imagination Seriously” has been translated into 35 languages with more than one million views. Oprah ranked Echelman’s work #1 on her “List of 50 Things That Make You Say Wow!” and she recently received the Smithsonian American Ingenuity Award in Visual Arts, honoring “the greatest innovators in America today.” Her sculpture has become focal points for urban life on five continents, from Singapore, Sydney, Shanghai, and Santiago, to Beijing, Boston, New York and London. Dropping a line into the water has been a tradition at the St. Pete Pier since its earliest days in the late 1800s. The new Pier has a dedicated Fishing Platform built on caissons leftover from the Inverted Pyramid Pier, inviting you to get closer to the water — and the fish. Walk down a small set of steps to a spacious deck that accommodates a multitude of people enjoying one of St. Petersburg’s favorite pastimes in the fish-fertile waters of Tampa Bay.

Feel free to bring your own rods, reels, bait and tackle, but don’t fret if you want to fish on a whim. Gator Jim’s Tackle at the St. Pete Pier provides everything an angler could need — gear, tackle, nets, a large variety of bait and more. Pier Gear & Gifts also offers brand-name sunglasses, jewelry, sundries, beach clothing and supplies, and art by local artists.

You just might find you’ve worked up an appetite, or thirst, when you reach the Pier Point. Teak, a fine restaurant named after a fine tropical hardwood, is the marquee eatery in the elegant building at the end of the Pier. Located on the fourth floor of the Pier Point structure, Teak offers upscale dining imbued with a Florida flair, and lovely views of Tampa Bay and the ever-growing St. Pete skyline. Up on the roof, you can kick back at Pier Teaki, a modern take on the classic tiki bar. At ground level, there’s the Driftwood Cafe, rising nine feet from the Pier Point deck and connecting to the tilted lawn. It’s a casual walkup spot offering ice cream and snacks. These three places have the same local ownership as the nearby Birchwood, one of of Beach Drive’s hottest spots and home to The Canopy, St. Pete’s premier rooftop lounge. Of all the places you can grab a bite on The Pier, Doc Ford’s Rum Bar & Grille is where you’re most apt to find a party. The 10,000-square foot restaurant/bar serves authentic Florida fare and flavors from throughout the Caribbean Rim. A wildly successful destination restaurant with three other locations just south of Tampa Bay, Doc Ford’s takes its name from the main character in over 20 Florida-themed novels by best-selling author Randy Wayne Wright.

This Pier was made for walkin’. A continuous sidewalk and large pedestrian path allows for all the scenic strolling you’d ever want. You’ll start with terrific views of the St. Petersburg Municipal Marina, its array of majestic boats and the city waterfront, loop south past Doc Ford’s restaurant and then to the Pier. Just past the Pier Approach, the “Bioswale” is one of the many eco-friendly aspects of the new Pier — and a tree-populated park that’s ideal for a picnic. With lots of seating and shade, not to mention plenty of grass and flowers, this area is a charming little world unto itself. It overlooks the North Basin facing toward Vinoy Park and the Vinoy Renaissance Resort. The Bioswale/Picnic Area is also home to smaller events. 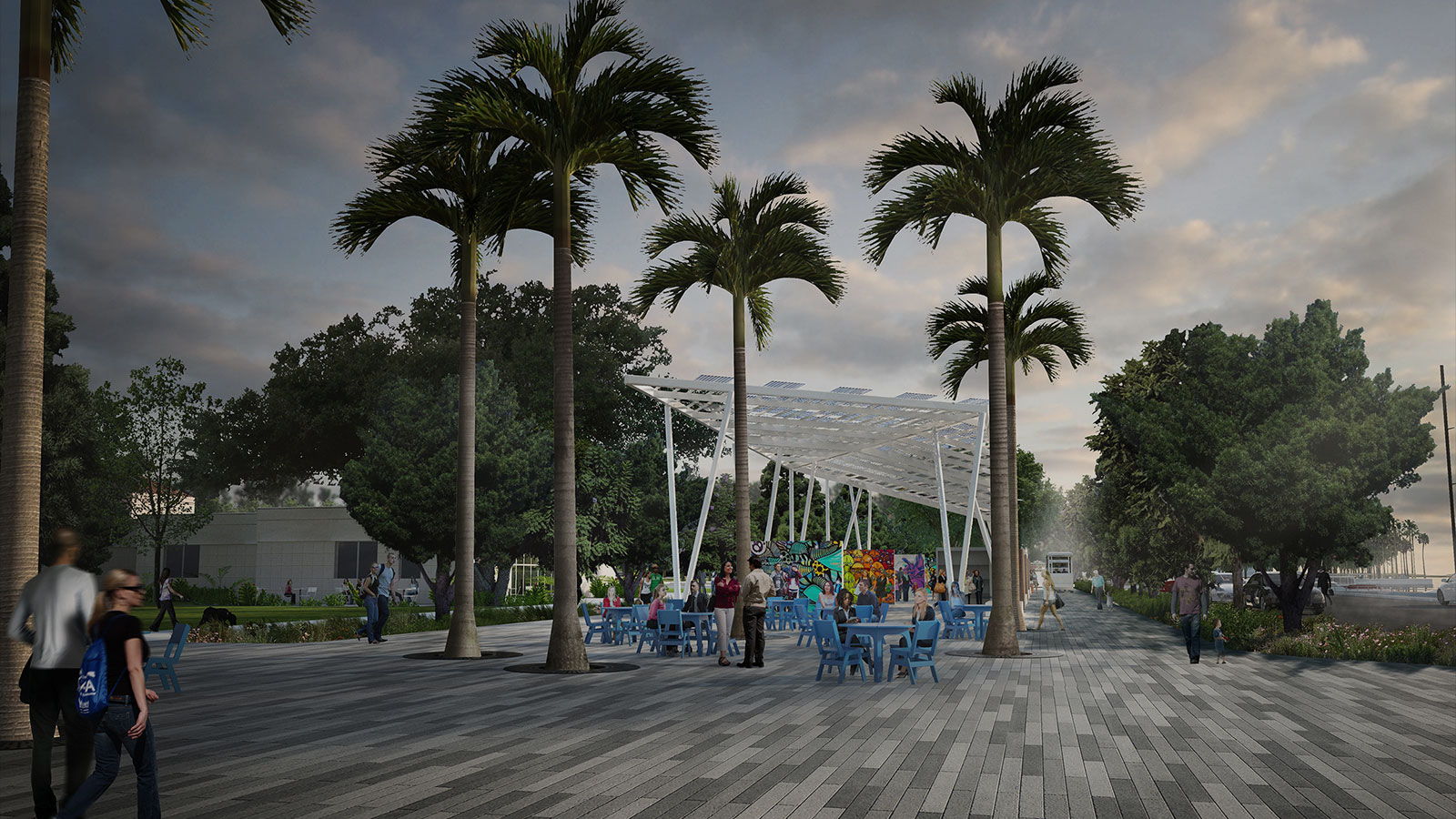 Located just past the Pier’s Gateway, the Marketplace features an array of independent vendors selling unique items in kiosks and under 10’x10’ tents. A solar roof structure provides shade as you browse the selections and meet the sellers.

St. Pete’s buy-local culture is represented in this lively bazaar, just a short walk past the Pier’s Gateway. Area vendors showcase and sell their wares in kiosks and beneath 10-by-10-foot tents. Shoppers can browse under a solar roof structure that provides ample shade. The Marketplace features a cast of vendors selling an array of products, many with a local flair. This inviting entry point to the St. Pete Pier features a stylish structure to provide shade and comfort, as well as a cafe that offers grab-and-go food items, as well as other healthy, interesting and more traditional food selections. The Pavilion is surrounded by colorful tables and chairs, so you can munch on a snack, sip a drink, enjoy good times with friends and family, or just exhale and enjoy the view. At the Pier Plaza, visitors will also find an interactive water feature that is both a fountain and a splash pad, with big and small vertical water jets. Perfect to keep the kiddies cool–while tiring them out in the process. Downtown St. Petersburg finally has a true beach it can be proud of! Spa Beach has been expanded and given a naturalized shoreline, and you can easily get here on foot from anywhere along St. Pete’s gorgeous downtown waterfront. Beach volleyball and other activities abound, and kayakers and paddleboarders can easily launch from this area. If you’re a visitor staying downtown, you can now get sand between your toes without having to drive across town to the Gulf Beaches.

If there’s one thing you need in Florida, it’s shade. Fortunately, the new St. Pete Pier was designed to provide shade in spades. The Coastal Thicket, which runs along the north side of the Pier, invites you to take a relaxing walk or bike ride through an oasis of native Florida plants, trees and shrubs. Vegetation includes large trees like the wax myrtle, myrtle oak and white buttonwood, as well as sabal palms, palmettos, sea oats, and native grasses. The ADA-compliant boardwalk starts north of the Pavillon and runs all the way to the Pier Point — and it’s illuminated for evening strolls. Even though the Coastal Thicket is a shady canopy, it lets in plenty of sun. This stretch of the Pier is ideal for getting outside in the hot Florida summers. And it only gets better in spring and autumn!